Some headlines to reflect on:

“Facebook was the most visited website on handheld devices, with 43 million hours spent on it in December 2010” – Do you block Facebook in school? if so are you not missing out on an opportunity here?

Our school has opened used it – check out one of my earlier posts: http://bit.ly/laYjBx

“Many of those taking part in Ofcom’s survey confessed to being obsessed with their smartphone. 37% of adults and 60% of teenagers described themselves as "addicted" This also raises the question whether mobile phones are allowed to be used in your school or not? We have openly embraced mobile phones as a vital tool for learning. Considering how many children have ‘smart phones’ at their disposal in their pockets is it not a valuable resource that if banned would be not utilized. Why do you need 1 to 1 computer access in a school for web browsing if the students have it on their own device? Why not just open up your systems within school for students to use them? 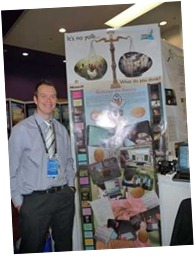 This is me pictured presenting my project capitalising the use of smart phones in Hong Kong in 2008 – the project later won a Worldwide Innovative Teaching Award.

After reading some of the Ofcom report already – I don’t think I can deal with this in one post and will write some more based on this.