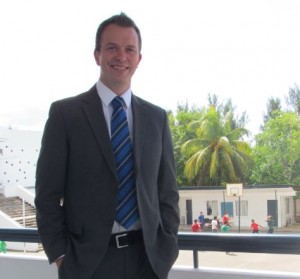 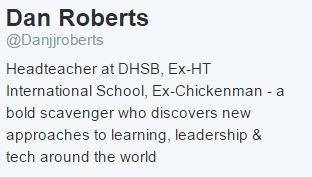 Dan Roberts is a self-professed “geek” who has always loved school…and is sometimes known as “The Chicken Man” (a moniker bestowed on him by his students during an especially unique class project called “Recharge the Battery”). As he explained to the TED London crowd, “Learning actually saved me several times as I was growing up.” Luckily for his students, Roberts has kept that love of learning, and it translates into his teaching each day.  So much so, he has won numerous national and international teaching awards, most recently the ICT Visionary in Education  at the TES Schools Awards. He has held various positions of responsibility within secondary schools, including Deputy Headteacher at Saltash.net Community School in Cornwall and most recently for the last 18 months was Headteacher at the International School of Seychelles. His 5 minutes of fame was in 2009 when he advised the Obama administration as part of their educational technology reform 2020 plan

Dan is currently Headteacher at Devonport High School for Boys in Plymouth which is in the top 50 state schools in the UK.