x
by danjjroberts
on March 8, 2010
under History
∞ Permalink

Some of you call me the Chickenman, some may call me darling, or other names that I couldn’t possibly repeat in public but now please take note that from now on I would like to be called by my full title, CHIEF GBASI of TIKARIJI which means star of the village. Whilst in Nigeria visiting the community in the district of Karu (where our Nigerian partner school is located) we were privileged to be invited to meet with the chief of the district.

Chiefs or King’s as they are sometimes called are born into the position through their bloodline. The chief in each district or area in this case it was Karu is an extremely important and powerful person although they do not have the more strategic power that the government has. For example the government create policies and put them into practice, they actually pay a salary to the chief because actually he has the ‘real’ power as he can mobilize his community which in some case can be a very large population. The people within the community follow whatever the Chief says and so they potentially are more powerful that the government.

Whilst visiting the Chief we heard lots about the community and his role, we were also treated to some traditional tribal dancing and music. See the video below:

Afterwards we had the ultimate honour to receive a special title, complete with clothing and even a golden cane. You can see the picture below: 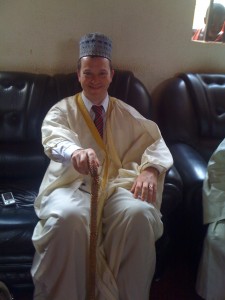 I am now officially the GBASI of TIKARIJI which means anytime I return to Nigeria I must attend the Chief’s palace and pay homage to him and his people. Now I thought this was some sort of silly title, a bit of a gimmick perhaps however I realised that this wasn’t when I came to check out my hotel. On top of my bags I had the golden cane, I was questioned quite assertively by the concierge where did I get that? He told me that you can’t but it so where did I get it? I told him the story and I had written down my title. He then basically proceeded to bow down (This was serious and I was quite shocked), it just so happened that he was from that same community and so had to show respect to my title. Wow what an honour! This little experience of becoming a chief reflects the whole experience that I have had visiting Abuja, the people are amazing, they have a lovely nature and have welcomed us into their lives.