x
by danjjroberts
on August 31, 2009
under History
∞ Permalink 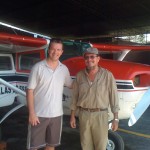 Wow so we wake up in Satipo extremely satisfied – my roommate Matthias (the teacher from San Jose and me constructed a magnificent totem pole or like a pyramid of worship made from random pieces of furniture and baggage from our room at 1:30am! (it made us wake up with a smile anyway!) You may be asking Why we did such a thing? Were we still suffering the effects of altitude sickness or perhaps had we started drinking the manioc already? The reason however is none of the above it was simply to be able to turn our air con on so we didn’t sweat to death in the night! When I say air con I mean an electrical table fan however there was one slight problem the only plug socket was on the ceiling and the lead that powered this breeze machine was about 5 inches long.  When we placed the fan on top of our magnificent piece of modern engineering it was able to reach the socket and more importantly worked keeping us refreshed all through the night!

Anyway enough about the proud moment of two simple men! Actually before I carry on with the serious matter of travelling into the rainforest by tiny plane I really feel I must mention the other comedy moment involving showers with two ladies who shall remain nameless to protect them from the potential worldwide embarrassment (Ok I give in it was the two female teachers on the trip Emily from Cirencester and Clover from New York) So what basically happened was that Emily was taking a nice hot shower (the last for a number of days) when she turned the tap to get more hot water, unfortunately it then came off in her hand followed by a jet of water, Emily tried to put the tap on but had no chance she then screamed for Clover to help whilst trying to cover her nakedness. To add to the embarrassment obviously Clover was only able to call for the man at reception to come and switch of the water. Now this would obviously be a funny and embarrassing story as it is but it gets even better. Due to the problem with the shower the girls were given a new room without the knowledge of the old cleaner chap who then proceeded to walk in on Clover as she was naked in the shower! I saw the old fella in reception later and he seemed extremely happier than he had been earlier.

Ok that really is enough of embarrassing my colleagues on with the real stuff! So we set off to fly by very small plane via a tiny airstrip. We took a mototaxi which is a tuc tuc if you are in Thailand! Watch the video below:

The airstrip was amazing (see video below) just cut out of the landscape and all that was there was a tiny hangar, a very small plane and a 30 year experienced pilot that went by the name of Enrico (he also as you may have noticed looks similar to Fidel Castro but with a slightly shorter beard see the picture at the top of this post)

Due to the very small size of the plane – we had to do several trips with all our luggage as a result we had to weigh ourselves and all our baggage. There was a 450kilo limit per flight and this is why we had to have the big weigh in.

Sooner or later it was time to fly – the flight itself was definitely one of the highlights of the trip, the scenery was breath taking flying deeper into the Amazon rainforest. As you can see in the video below we flew over forest, rivers and we even spotted areas of deforestation and logging. There were definitely some nervy moments like the take off when we only just cleared the trees, the sudden drops in altitude because my knees knocked some of the switches (I sat in the front and my stupidly oversized legs made Enrico have to stay alert for sudden changes) and also the landing on a even more remote airstrip at Cuti. In the next few days I will tell you about our arrival in Cuti including our first near death experience and a visit to the local school.