x
by danjjroberts
on June 23, 2009
under History
∞ Permalink

Heroes are global
All around the world
Helping people to live and to grow
With our qualities, we’re a community
We are together, we are one”

That is the chorus to our song from our international collaborative project a picture tells a thousand words. Who would have thought that at the Worldwide Innovative Teachers Forum in Hong Kong in 2008 about 6 months ago that some Year 7 students from Saltash.net (little town in Cornwall) would have taken part in a global collaborative project involving teachers and students from 5 countries, presented to 300 teachers in Indonesia as part of a live television broadcast to 30 million people, named a new child and wrote, performed and produced their own song! All this came as a result of the Baby 5 project that was created by 5 teachers in Hong Kong.

The teachers pictured below from left to right, Ike (Nigeria), Lois (Canada), Me (UK), Kathleen (Ireland) and Manpuano (Indonesia) created this project at in November and we have just completed it. 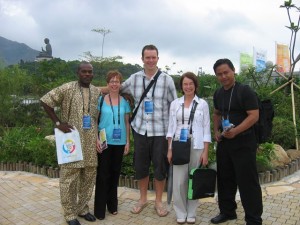 Here is an overview of the project:

The planning and origin of the project

1. Background information
In Hong Kong, a statue of Buddah was completed in 2003 after 10 years at the site of a monastery. After visiting, we recognized how important this statue of Buddah was to the monastery and wondered if other countries and cultures had a symbol/person/object that had such an important meaning to their community.

2. Planning
This project requires collaboration with a number (5-6)of other schools as a means to collect data. These schools can be within your local community or from the larger, global community. You will act as the moderator for this collaborative project.

3. Essential Question:
What will the future global citizen look like?

• Determine if people around the world have a common set of attributes
• Examine whether cultural identities influence the behavior of people
• Identify characteristics future global citizens will posses to be successful
• Learn about other cultures and countries
What tasks will allow the students to respond to the essential question?
• Divide the classroom into groups and brainstorm a person who your group thinks possess the qualities needed to be a future global citizen. Present (sell) your choice to the class.
• The class votes on one person that they believe is the best choice
• Using only images, tell the story of your person to demonstrate the qualities they possess that make them a great, future global citizen (Photostory, Photosynth)
• Send your “story” to one of the other classes involved in the project.
• Review the “story” that has been sent to you and create a set of inquiry questions that will help you analyze this person.
• Respond to the questions that you have been sent to further clarify your global citizen.
• Post all stories and questions with the responses to a collaborative blog or website
• From all the stories posted to the blog, have your students submit, to the moderator, a list of 10 common characteristics they have identified.
• Fine tune the list to eliminate duplicate characteristics and post the characteristics that a future global citizen will need (have) in order to be successful

This was a fantastic project that really opened the eyes of all of our students. A quote seen below was taken from some of the press coverage of the project:

SALTASH schoolchildren have appeared in front of a television audience of 30million people – in Indonesia.

Youngsters from Saltash.net Community School used a video link to take part in a regional teaching conference in Java.

The conference was then transmitted on Indonesia’s main television channel to an estimated 30million viewers.

Assistant headteacher Dan Roberts said it was the sort of audience you would only get in this country for something like England playing in the World Cup Final, but Indonesia had a much bigger population.

He added: “We were taking part via a videolink in a conference of about 300 teachers in Java, the equivalent of a South West teaching conference, and for some reason the main Indonesian channel picked up on it and ran it as a live feed.“
Mr Roberts said the dozen 11- and 12-year-olds, in a specially-equipped room at the University of Plymouth, did not seem fazed by the fact they were talking to millions of people on the other side of the world. The assistant headteacher and the Year 7 youngsters were talking about their involvement in a project which links them with children in Indonesia, Canada, Nigeria, Ireland and China.
The project, A Picture Tells A Thousand Words, sees pupils in each country telling each other about local heroes as a way of learning about their respective countries and cultures.
Mr Roberts said: “They loved the fact that they could chat to students on the other side of the world, living in such a different world to themselves, in the same way they could talk to children in the same street. The video conference has brought this project to life.
“They can now picture the Indonesian children, they’ve heard their language and hopefully that will help them when it comes to learning about global citizenship”.
Ofsted has just praised the school’s use of enhanced computer technology across the curriculum, thanks to its status as a specialist college in science, mathematics and computing with a rural dimension.”

Finally students then wrote, performed and produced their own song on this project using a microsoft product songsmith all in 40 minutes of a lesson! (See the next blog)